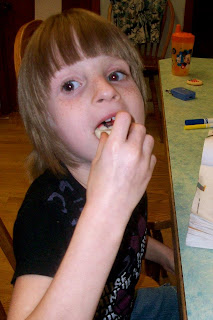 
Sydney earned her ten stickers in ten days and got her livestock truck a couple of nights ago. She is thrilled and so am I.  She weighed in at 39 pounds last evening. Sydney weighs herself almost every evening after her bedtime snack and comes and tells me what the scales say. Usually she has the numbers mixed up and says something like “eight-three point five” or “thirty eighty ninety-nine.” When Sydney came to me and said she was 39 pounds I doubted her and followed her to the scales. I had been excited we were creeping up past 38 and a half pounds at the beginning of the week. Of course, weight can fluctuate a little so tomorrow we may be back under the 39 mark. However, we have been stuck at 37 and 38 for a long time so anything close to 39 is looking pretty good. The doctor will be pleased if this continues. I believe it is the 300 calorie bedtime snack that is making the difference, just as the doctor said it would. I don’t think we have made our goal of 1600 calories a day, more than twice since our trip to the endocrinologist. THAT is a lot of food for a tiny little stomach to hold. I have made a huge effort to push bread, pasta, meat and desserts and have limited the vegetables and low calorie snacks. It is getting easier for me to say “no” to the request for raw carrots or green beans and hand her a brownie instead. haha

Sydney had a bowl of vegetable soup for lunch today after a week of going without her favorite lunch. She LOVES vegetable soup. She misses her vegetables the way I would miss my Dr. Pepper if I had to cut way back. I have found several high calorie snacks Sydney likes now. Little Debbie’s cakes are at the top of the list, along with pudding cups and pecans. It doesn’t take very many Oreos or peanut m&ms to get to 300 calories either and she loves those. Sydney and I have made a couple of trips to the grocery store in search of new snacks to try. Reading the labels is something I have done for years for myself but I was always looking for lower calorie foods, not higher calorie foods. I know a lot of people who would like to “trade” weight problems with Sydney, and I am one of them.  haha

I may actually be able to retire the 4T shorts at the end of this summer. The 4 slims are getting just a little tight too! I never had a kid wear the same shorts three summers in a row before. Sydney's wearing them all out.  I tried 6 slim jeans on her today. She'll need them for the length and we'll just have to cinch them up really tight. Thank goodness for the adjustable waists in pants these days!

Find me on Facebook at Quirks and Chaos. Like what you read? Want to become a follower? Click on the Google Friend Following gadget on this blog. It's over on the right side and asks you to subscribe. Or you can add the URL (the web address in your search bar) to your Reading List. You can do that by clicking the plus sign in front of the URL. Thanks!
Posted by mother of many at 10:29 PM