"A friend is a guy who likes you." Tate

Summer is coming to an end. In an effort to transition Tate back to school I have been reminding him of the people he knew last year and the things he did at school. I had fully intended to have play dates for Tate this summer. But, the summer flew by and I did not make the effort I should have. Because Tate does not like things or people out of their places, he has never been interested in having classmates over. The few times I have suggested bringing another child with us on an outing or having someone over to play, Tate has become nervous and made excuses. We tried it a few times when Tate was seven or eight years old but Tate was less than thrilled about it then. I am embarrassed to say I took the easy way out and let opportunities slide by many times over the years. Yesterday I told Tate he was going to have a friend come over today to swim. He made lots of excuses about why it wouldn’t work. I ignored him. This morning we went and picked the friend up and he came over to swim and play for a while. This particular boy is an answer to my prayers, literally. His personality and energy level balance the deficits Tate has. He is enthusiastic and excited but not so wild that he intimidates Tate. This boy seems to understand when to gently lead Tate in the direction he needs to go and when to give him a hard push. The most important thing though, is that he genuinely likes Tate and wants to be his friend, even though Tate cannot fully reciprocate in many ways.
Tate has never been ostracized by his classmates or mistreated in any way. It has been quite the contrary. Almost all of Tate’s classmates have been great with him. It is just that Tate has never seemed to tolerate peers quite as well as he does the boy who came over today and just a small number of others. 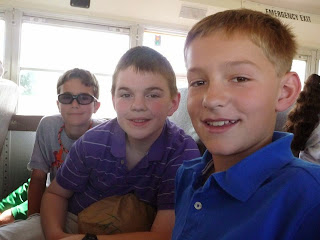 I was pondering “friendship” this evening and what makes a good friend. I asked Tate if he knew what a friend is. Tate is used to me asking him to define words so I can be sure he understands the things we are talking about. Tate told me “a friend is a guy who likes you.” I thought it was a pretty good definition. I remember a quote my older sister wrote down for me once when I was in grade school.  It has stuck with me my whole life: “I went out to find a friend and could not find one there. I went out to be a friend and friends were everywhere.” A good friend is someone who puts your wants and needs before his own. I’m not sure Tate will ever know how to BE a good friend because autism has robbed him of many things, but I do know he HAS a good friend right now. He has more than one!

Find us on Facebook at Quirks and Chaos. Or, if you liked what you read and want to become a follower, click on the Google Friend Following gadget on this blog. It's over on the right side and asks you to subscribe. Or you can add the URL (the web address in your search bar) to your Reading List. You can do that by clicking the plus sign in front of the URL. Thanks!