There is no ham in hamburgers

I have been a mom for 27 years. I was 25 years old when I became a mom for the first time. As almost every mom will tell you there is no describing the overwhelming love a mother feels for her child. You really cannot know that feeling until you become a parent. As a young mom of a typically developing child, and then two, and then three, and then four.... I got to do a lot of amazing things with my kids. I enjoyed my time with them very much. When my sixth child was born I was not quite so young anymore. I had children at home, aged 13, 11, 8, 6, and 3. I'd had enough experience to know what I was doing. I had taught a lot of kids to walk, talk, use a spoon, brush their teeth, dress themselves and all the other things moms teach their kids to do. I really knew what I was doing. Except this time I did not. This time my baby did not learn the things I tried to teach him. This time was different. And around age two and a half the things he had been able to learn he seemed to forget. And that's when I knew. That is when I knew that something was really not right. And I first heard the word "autism." Autism has robbed my son Tate of a lot of things but autism has not robbed us of everything. Autism has never been able to limit our love. Autism has not taken our sense of humor. And in spite of autism, we have a really good life. Tate, not autism, is celebrated every day. Tate makes my heart smile. He does that in a lot of ways. Sometimes even the obsessions, struggles and misunderstandings are an endearing part of our lives. Tate is different than his siblings but different is not always bad or wrong. Different is just different.

I have tried to illustrate some of the ways Tate thinks differently.

Tate, being a very literal thinker is often struggling to understand figurative language. Words with more than one meaning are also often misunderstood. Here are just a few of the things I've had to try and reconcile for Tate recently.

If Tate believes someone is upset with him he becomes anxious. It is not often I lose my patience with Tate. I know it will take him longer to get past a conflict than it will me and usually if I have to correct him I do it with a smile on my face so he understands he is not "in trouble." Sometimes though I slip. The following illustrates the results if I lose my cool. 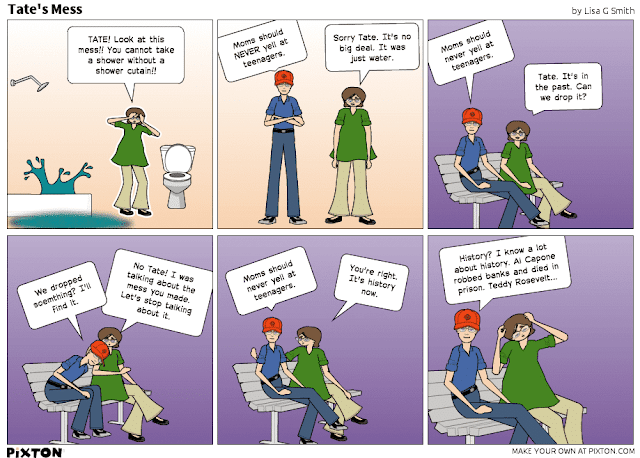 Nine months of each year for the past three, Tate insists on wearing a hoodie. He has several, his favorite have a Kansas University Jayhawk on them. He becomes upset if he is asked to take the hoodies off but sometimes I must insist. His hoodies are as important to Tate as a blanket or pacifier can become to a baby. A hoodie seem to be his comfort item.

Tate, like many people his age would rather not help with chores. Sometimes he can be coaxed into helping out but most of the time he is ready with an excuse. The exception is laundry. A few months ago he discovered he likes to do laundry and he takes his job very seriously.

Tate's little sister drives him crazy but he is also very protective of her. He can yell at her himself but he sure does not want anyone else saying a cross word to her. Sydney was born in Russia and we adopted her before her first birthday. Tate tells me often that her Russian heritage should exempt her from behaving. It makes perfect sense to him.