It's Too Loud In Here! 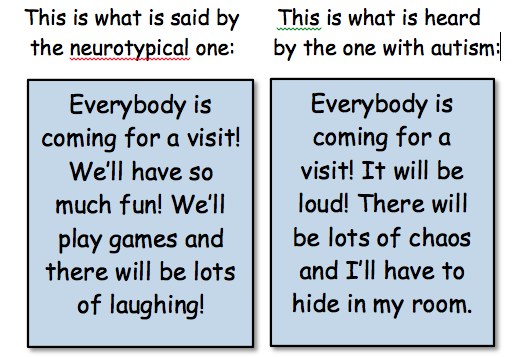 Many people with autism like to be alone. They like quiet. They like calm. They might like some noise but only controlled noise. So, they don’t necessarily want silence and I’m not sure it is even about volume so much. They just don’t want unpredictable noise or chaos. For example, Tate loves music, television, and movies. He even likes surround sound but he NEEDS to be in control of the noise. He needs to be able to walk away if he is feeling overwhelmed. He wants to pick the movie and control the remote. He can feel at ease if he is controlling his environment and is able to predict what is going to happen. Touch, smell, taste, and sight are all a big deal to a kid with autism and I recently addressed some of Tate’s issues with touch. Noises (sound) are also an issue with many kids with autism.

Tonight we went to a restaurant. Ten feet from where Tate was sitting was a crying baby. Now, Tate doesn’t hate babies but Tate was miserable. He squirmed. He complained. He whispered things about babies who cry (whispering to himself is one of his stims). He stuck his fingers deep into his ears. He asked me if I had any headphones. (They use headphones at school to help with the noise level sometimes.) The screaming went on for about ten minutes while the mother ignored her baby. I love babies; but I honestly was beginning to squirm a little myself. Finally, the mother picked the baby up and gave him a bottle. The little guy went right to sleep and we were able to enjoy our meal. I have a friend who has a son with autism who probably couldn’t have lasted the ten minutes. They would have had to leave after just the first cries. Interestingly enough though, I have another friend who has a son with autism and when he goes to a restaurant he, himself, makes a lot of noise. He is non-verbal and one of his stims is to make loud noises. (Remember, autism is a spectrum and people are all over that spectrum.) The same young man who likes to make loud noises? When his baby brother cries he puts his hands over his ears! My theory on this is that he does not like his baby brother’s noises because they are totally out of his control and unpredictable. He needs to be in control of the noise to be able to tolerate it.

Recently, Tate’s sister and I were in the living room watching a movie that Tate loves. I told him I wanted him to watch it with us. He watched it but he could not relax and really enjoy it. He sat in a hard backed chair behind the couch, instead of on the couch with us, and watched from the dinning room. He could not relax because he was not in control. He was not alone to enjoy the movie and he was not going to be able to pause it if he wanted to, or run it back and watch his favorite parts more than once, or fast forward through the song he did not like. He would have enjoyed the movie so much more if he’d been alone to watch it. When given the choice he will almost always choose to be alone.

Having seven children and belonging to a small, close-knit church family, we have always had a lot of “people traffic” coming through the house. It sometimes gets pretty loud in our home. When he was little, Tate did not hang out in the living area, showing off, and trying to get the attention of the adults as my older children had. He did not run off to play with the other children. He usually snuck off to my room, climbed into my bed to watch television, and wait for everyone to leave. I’d find him and invite him to be a part of our gathering, but know that he would not be coming out until the noise level was back down to his liking.

Tonight when the baby was crying, I was not only feeling a little stressed from hearing it myself, but I was watching Tate squirm and I was feeling stressed because he was stressed. I try hard to make his world “autism friendly” while at the same time challenging him to step out of his comfort zone and make his world a little bit bigger. It’s a fine line. I am usually guilty of staying far inside his boundaries to keep him happy but once in a while I drag him too far across the line and feel terrible about it. Sometimes it does pay off though. Sometimes, instead of a meltdown and huge amounts of anxiety, that lead to nothing but more anxiety, we get growth.

Going through a carwash was out of the question a few years ago. The noise terrified Tate. Now they are very doable. Tate still becomes a little nervous, probably because of the noise, but he loves watching the soapsuds cascade down the windshield. Smoke detectors at home and fire drills at school are no longer things that send him into a panic. Fireworks are another example of progress made. When Tate was young, a fireworks show would drive him over the edge. On the fourth of July, his siblings would have a great time with their dad out in the yard lighting fireworks. Tate would be inside in my bed hiding under blankets while I tried to soothe him. We did not stop celebrating the fourth or make our older kids go somewhere else to light their fireworks. Although we are very considerate of Tate’s disability and his sensory issues, it cannot ALWAYS be about Tate. We do have six other kids who need parents too. Surprise! Somewhere around age six or seven, Tate decided fireworks were pretty cool. Now he looks very forward each year to those loud pops and booms. He still watches and listens with his fingers in his ears but he enjoys the lights and noise quite a bit. He’s really livin’ on the edge now, huh?

Note: Most children with autism have Sensory Processing Disorder (SPD) and I will be writing more about Tate’s sensory issues in the near future. I recently wrote a blog post entitled “Don’t Touch My Skin” about his aversion to touch that you might find interesting.

Find me on Facebook at Quirks and Chaos. Like what you read? Want to become a follower? Click on the Google Friend Following gadget on this blog. It's over on the right side and asks you to subscribe. Or you can add the URL (the web address in your search bar) to your Reading List. You can do that by clicking the plus sign in front of the URL. Thanks!
Posted by mother of many at 7:23 PM