Note: This is not a typical Quirks and Chaos post. This is a tiny glimpse into the world of feeding tubes, modified tricycles, and wheelchairs, and what lengths a mom and her friends will go to in order to secure the needs of a very special little girl with Cerebral Palsy.

Except for my initial Farmville addiction and my stint in “Farmville rehab,” social media has been mostly a positive thing in my life. I was not necessarily expecting to turn strangers into friends through social media but it happened. I found a group of ladies on Facebook, through a friend, and I feel like I have found “my people.” Together we encourage, laugh, tease, listen, discuss, share and pray for one another. One of these ladies I hold dear needed me to help her with a project this week. Sarah is one of my favorites, but then I have several favorites.

Sarah has a four-year-old girl named Addie. Addie was born at 29 weeks and only weighed two pounds. Addie has Spastic Quadriplegic Cerebral Palsy and Epilepsy. If you don’t know much about these conditions, try Google. That’s what I did when I met Sarah on Facebook. Addie’s muscles are weak. She doesn’t walk yet but I have faith she will one day. It made my day recently, when Sarah posted a video of Addie riding a modified tricycle for the first time. The sweetest voice exclaimed, “I’m doing it! I’m really doing it!” These kinds of things are pretty huge in Addie’s world.

Addie cannot eat a full meal because all the chewing and swallowing is so hard for her. She gets tired before she gets full. Addie gets a lot of her calories through a feeding tube. Her mom hooks a tube of food to a port that delivers a liquid food straight into Addie’s stomach.

Sarah wrote this: Last year Addie was in a two-month clinical trial of a new enteral formula, which did AMAZING things for her. However we currently cannot get a GI doctor to take her on as a patient… and her insurance will NOT pay for it. Her daddy is a preacher and this is something we just can't afford. 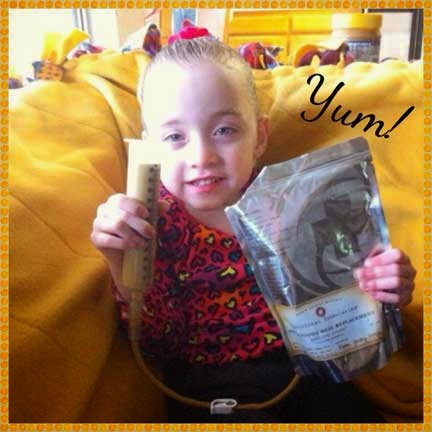 The formula Addie tried for two months is called Liquid Hope. It is made by a company called Functional Formularies. The Liquid Hope contains “nutritionally dense, vegan, dairy-free, gluten-free, GMO-free whole food, with complex carbohydrates and no sugar added.” This I got from the Functional Formularies’ website. One feeding of Liquid Hope costs $7.99. So, three meals each day would cost a family $23.97. The commercial formula that the insurance companies seem to prefer to pay for are filled with sugar, corn syrup and chemicals.

And that brings me to the contest I spoke of. Addie is entered in a contest along with thirty-nine other children. The winner of the contest will receive 12 months of Liquid Hope at no cost to them. Functional Formularies will donate this formula to the winner. What the company gets in return is the awareness that is being spread. If enough doctors and insurance companies hear all the “noise” being made by all these voters then maybe they will see the need to add this Liquid Hope to their patients’ health care plans.

I decided before the contest even began that I was going to help Addie in every way I could. I was going to leave no stone unturned. I did not really know what to expect. The number of votes for Addie was fairly small at first. I could not imagine how Addie was going to be able to successfully compete when two of the other children had hundreds of votes within hours of the start of the contest. Then I thought of my brothers and sisters in Christ and my doubts subsided. I knew that if I got the word out, members of Christ’s church would get behind this Christian family. What a campaign there has been as the votes steadily increased and the word spread!

It has not been easy though. I’ve had a very humbling week and I’ve been taught a few things. I have learned that I cannot guilt people into voting. I can inform and educate. I can ask and even beg. I can nag and make a real nuisance of myself even. But, in the end, I cannot make anyone do anything at all. I have also learned that people often forget to return a favor. I expected people to jump on board with my campaign because of all the things I have done for them. I have voted in contests of all kinds and shared most of them in the past. I’ve voted in a contest to win boots, and one to win a grill, more than one for artwork, and several baby beauty contests. There have been several contests for photographers, authors of a children’s book, and “vote for my school” contests that I had participated in when asked. I was sorely disappointed when almost none of the people who I had helped, jumped on board for this contest that was of so much more importance. I have had complete strangers from groups I am in share the contest and help me to beg for votes, but almost none of the people I thought would help me have come on board.

I’ve learned or been reminded of a few other things this week. I know that sometimes I push too hard; and sometimes in my zeal to help someone, I forget that not everyone has the same priorities as me. I have been reminded, that sometimes, even good people do not agree on what is good and what is not. There were a handful of people who I spoke with who see the contest as cruel. I heard, “the company is pitting needy families against each other.” I could understand why they might feel this way. One child will win and 38 will lose but each parent entered the contest knowing that only one would win and they were willing to compete. The company is benefitting from the contest by raising awareness, which should in the end help all of the children to gain access to the healthier diet. The families see it as a win/win situation. Many of these families have come to know each other because of their children’s common struggles. There is no animosity.

Addie is in the lead this week. I don’t know if she will stay in the lead but I will do all that I can (within reason) to keep her there. If you have not yet voted, please go to the link and vote. The contest ends October 31, 2014. Vote for Addie

Quirks and Chaos is both a Facebook page and a blog written by Lisa Smith. Here is a link to the most read post to date: 15 Truths of Parenting Special Kids

UPDATE: Addie won the contest by 33 votes. Just an hour before it ended, she was behind. It had been "neck and neck" throughout the last day of the contest. Thank you to all who voted. And thank you to the providers of Liquid Hope. Through donations obtained BOTH of the front runners in the contest are to receive 12 months of formula and every child in the contest will receive one case of the formula. The company continues to accept donations for the children and any amount would be appreciated.
Posted by mother of many at 2:44 PM