I first heard of lunch buddies when I was at an autism conference before Tate ever began school. As soon as I heard the program described I was “sold” on the idea. I began asking for a program for Tate when he started first grade. After we discussed the lunch buddy program at a meeting and considered it for first grade, it was agreed that we would wait and begin it in second grade. There were several reasons involved. We already had several social skills “programs” in place that first year of all-day public school and they were very time-consuming for the staff. The speech teacher had launched a social skills group for Tate, pulling peers from his class two or three times a week to play games and encourage Tate to interact with his peers. We had an adult coach with Tate at recess prompting him to play with peers so he would not wander aimlessly, isolated or lost in repetitive behaviors. Tate was struggling to learn the names of his classmates so photographs of all his classmates were obtained and he practiced naming them and matching children to their names as part of his day. The school staff was working hard on so many things that the lunch buddy program was put off.

The lunch buddy program has been successful, in that Tate can sit amongst friends in a lunch setting and be fairly comfortable. Tate has learned skills and the coach has been faded much of the time. Tate still has autism but he is able to handle himself and respond appropriately in so many situations now due to all this coaching. As it turns out I often hear from the parents of the typically developing children who have participated that their children have learned so much from Tate. They are thankful that their children have learned about autism and have become very comfortable around my child with special needs. Among the things these children have learned are compassion, understanding, patience and perseverance. They also have a pretty good idea about what autism is and could probably generalize what they have learned to interact with other people with special needs.

I am a firm believer that the children who participated should be told about my child’s disability. I do not believe the lunch buddy program would have been successful for us without the full-disclosure that I insisted upon. Explaining WHY Tate is different than they are and WHY Tate NEEDS so much more instruction than they do was key. Children who are educated about autism are far less likely to bully a child with autism in my opinion. I do not have statistics on this. I did what made sense to me. I insisted from first grade on that Tate’s classmates be told that Tate has autism and then given an age appropriate definition of autism. I wrote a personalized definition with illustrations in a picture book format for the kids. It started out very simply in first grade and got a little more detailed with each passing year. See the book in my post: What is Autism. When Tate was in first grade I wrote a note to parents that went home in the first graders’ backpacks, explaining autism and letting them know their child had a classmate with autism. I wanted to take the mystery out of the reasons that Tate was followed around by a Para-Professional throughout his day. I wanted parents to be ready with an answer if--and when--their child came home and asked questions about Tate. 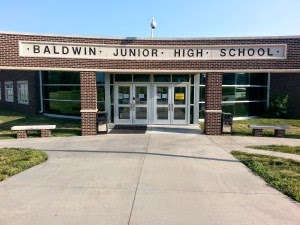 The lunch buddy program has evolved a lot over the years. We learned what worked and what did not and tweaked it as we went. In grade school there were parent permission slips that had to be signed so the students could participate. Tate’s whole class wanted to be involved and got those permission slips back quickly. The kids LOVED teaching Tate. When we began, in second grade it started with one teacher or Para-Professional sitting with Tate amongst several of his peers. His peers were coached before lunch some on how to try to involve Tate in their conversations. Tate was very hard to engage back then. He would talk to adults but not children easily. The kids would ask him questions they had rehearsed with a teacher in a short meeting. A peer might ask Tate, “Do you have pets?” Tate would answer, “Yes”. The adult would maybe have to whisper to Tate and tell him what to say next. So Tate might be coached to say, “I have a dog and two cats.” The peer would respond appropriately and maybe ask the names of the pets. The adult coach would push Tate to answer questions and then reciprocate to the child who had done the asking. So Tate would be told to ask, “Do YOU have any pets?” It was amazing to see the difference in the typically developing children and Tate. The peers just knew how to respond and keep a conversation going, whereas Tate had to be told. The peers knew they should reciprocate with another question and keep the “ball bouncing” while Tate did not. Heavy prompts had to be used for Tate back then. After trying these very scripted types of things and Tate not making a whole lot of progress, it was determined that the lunchroom setting was pretty overwhelming for Tate. So, instead of the noisy lunchroom, they moved to a classroom or the library where it was quiet and Tate would be more comfortable. Tate never eats a school lunch and has taken the same lunch from home for seven long years (peanut butter sandwich-no jelly, chips and a couple of cookies.) The kids that wanted to participate in the lunch buddy program after that first year would bring a sack lunch and commit to being a lunch buddy for a week at a time. Usually there were two or three kids who would eat with Tate for a week. The kids’ questions and conversation starters were scripted with note cards beside them or even written on a placemat. The kids got so good at doing this that a lot of times the “cheat sheets” were not used. The students became therapist themselves and the teacher would often sit back amazed at how well the kids were doing. Conversation skills are not the only thing that is worked on during lunch. Posture and body language is also constantly targeted. Keeping Tate from stimming with his hands and fingers and just looking odd in general has been a huge part of the lunch buddy program.

Because recess came right after lunch the program was carried over into the noon recess. The lunch buddies were asked to try to engage Tate in play at recess too. Tate often declined or tried to decline but his adult coach was right there encouraging him to participate in the peer activities.

For sixth grade Tate and his class moved to the junior high. The lunch buddy program continued. Tate and his lunch buddy group sat in the lunchroom that year, but at a table off to the side. It was still noisy and a bit overwhelming but doable. An adult was present every day but if the kids could keep the conversation going and Tate interacting the teacher was able to sit back and watch.

This year Tate is in seventh grade. Tate is sitting at the long tables with his peers three days a week with a teacher observing from a distance. If he becomes distressed or looks overwhelmed they go in and “rescue” the situation but the kids are always friendly and willing to help Tate too if they can. Two days a week the lunch buddies are back at the small table off to the side with a peer or two and a teacher. They are working on reciprocity and the coach is prompting Tate when necessary to ask APPROPRIATE questions and not just repeat the same question that was asked of him. (Read my blog post on reciprocity.) One day each week a Resource Room teacher is the adult at the table and one day a week the speech pathologist is the adult at the table.

There are a lot of variables involved in a successful lunch buddy program. I have mentioned the education of the students so they understand the child’s disability as one of these variables. Another is very obvious. You must have students willing to participate. We were lucky. The kids LIKED being Tate’s teachers. It made them feel important. The staff involved often praised these kids and let them know what a difference they were making. When Tate was in grade school I occasionally took donuts to the kids who were participating in the program. Without the kids motivated to help there would have been no success. Another must, also an obvious one, is a staff that is excited about the program. If the staff had not jumped on board and made the lunch buddy program FUN and interesting then the peer models would NOT have been motivated to participate. Tate has been blessed with several rock-star teachers who love their jobs. Lastly, I had to be vested in the idea. I pushed and pushed and pushed some more for social skills teaching in every IEP meeting we had and followed up to make sure things were happening. Let me insert here. I have had good relationships with almost all of Tate’s teachers and Para-Professionals. Had we been using our energy to argue instead of using it to help Tate then the lunch buddy program would have probably failed.

One more disclaimer here: Tate still has autism. Tate’s social skills are still very poor compared to his peers. He still is not really keeping up his half of a friendship with these kids at all.  Tate has peers that are so good to him and so friendly but he does not have nearly as much interest in them as he should. He is sometimes even rude to them because of his poor social skills. We have seen VAST improvement though because of the lunch buddy program. I remember reading when Tate was newly diagnosed that it would take hundreds of repetitive trials to teach him the things that other children were just absorbing from their environment. Tate has had over nine hundred of these lunches with his peer models and adult coaches at this point. I am confident I can say that I would be living with a “different” Tate had he not had this program in place.

Find me on Facebook at Quirks and Chaos. Like what you read? Want to become a follower? Click on the Google Friend Following gadget on this blog. It's over on the right side and asks you to subscribe. Or you can add the URL (the web address in your search bar) to your Reading List. You can do that by clicking the plus sign in front of the URL. Thanks!
Posted by mother of many at 12:02 PM