My thirteen-year-old son Tate has autism. Autism frustrates me. However, Tate does not. I adore my son and I am very patient with him. But, sometimes I want to shake my fist at autism. Autism keeps Tate from understanding so much about the world we live in. Autism keeps Tate from being able to verbally communicate well and converse. Lately we have found that Tate expresses himself better in text messages than he does verbally. I believe that it is partly because he can take his time. For Tate to converse with someone in person the other person’s very presence seems to intimidate him slightly. He is easily distracted and loses his train of thought no matter how patiently we wait on him to process our language and respond. Texting has helped Tate to be able to get his thoughts and feelings across to us. Tate often texts his adult siblings. They enjoy his communications very much.

Recently, my dad, Tate’s grandpa, lost his beloved German Shepherd in a tragic accident. My dad lives right next door to us. His dog Daisy spent most of her time lying on a rug in front of my dad’s recliner. But occasionally Daisy liked to play outside in his yard and in ours. We live out in the country where there is little traffic and our houses are well off the road so we were surprised when Daisy ran right out into the path of an oncoming car and was killed.

Tate, because of sensory issues, has never liked animals. He especially avoids dogs. They scare him a little I think. Tate knew Daisy’s name but he did not call her by her name. He called her, “The neighbor’s dog.” I asked Tate on several occasions why he did not refer to Daisy by her name or even call her “Grandpa’s dog?” Each time he told me the same thing, “She IS the neighbor’s dog.” Technically he was correct. He had me there. He does not refer to my parents as “the neighbors” but calls them “Grandpa” and “Grandma.” However, the dog was “the neighbor’s dog.” I think it may have been one more way of keeping the dog at arm’s length for him.

Tate does not often show empathy or sympathy for others but I have seen it on occasion. Tate was worried about his grandpa being sad. He asked me about it more than once.

Tate broke the news of Daisy’s demise to his brothers and sisters in a text message. I believe this is the first group message he has ever sent. Always before he has messaged them individually even if he said the same thing to each of them. Following are the screen shots of those texts back and forth. My older kids are so good with Tate. They know him well and can often understand what he is trying to say even when he does not say things clearly. Notice how he tries to correct the spelling of “aye” and how he picks up on the way they voted with “aye” and then wants to take a vote with “not” too. 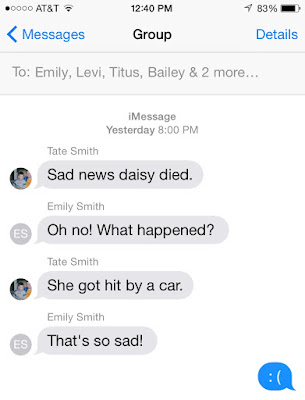 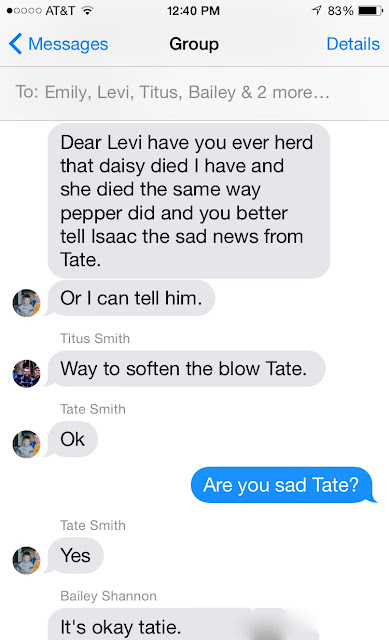 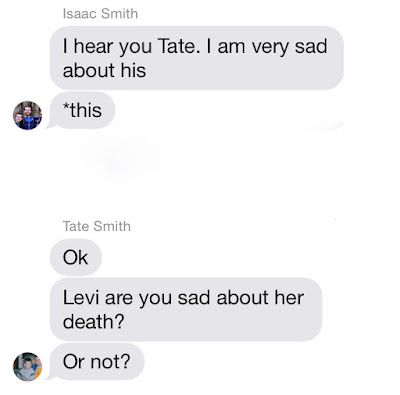 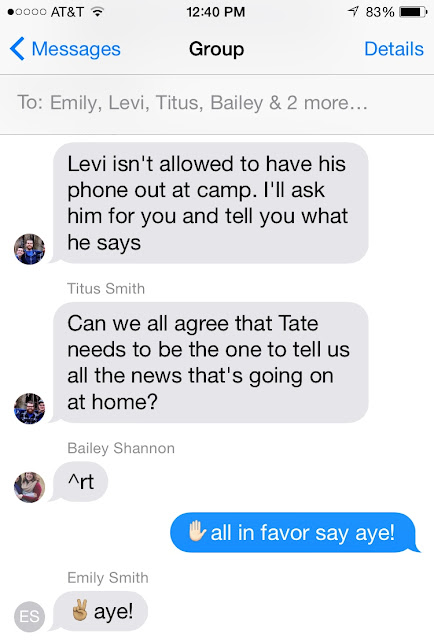 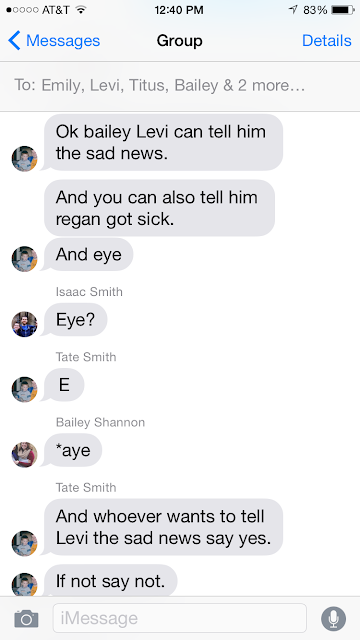 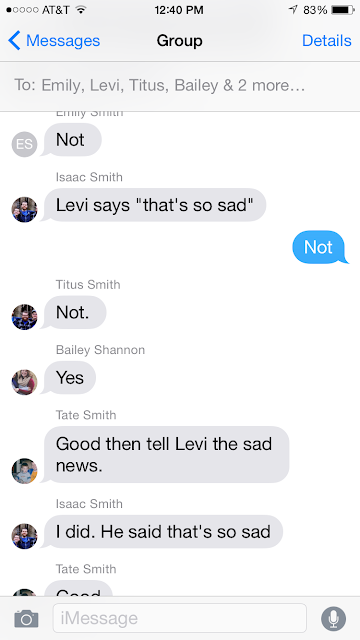 Note: We live in Kansas. Three of the kids were together in Arkansas when Tate was texting them. Levi, aged 17, was at Bible camp as a camper. Bailey, age 20, and Isaac, age 22, work at the same camp in Arkansas. Tate wanted to make sure they ALL got the message. Titus is married to Emily and they live in Connecticut. Regan was in Kansas but not with us at the time. She was in blue in the text as she was the one who forwarded the text to me. I sure love my kids. They all six are so good to answer Tate's texts and communicate with him anytime he needs them. I am so proud of them all.