The main road between us and our small town is undergoing some major renovations. The power company and other utilities have been digging and moving things for months. We’ve watched the backhoes and other machinery come and go and I have commented to the kids several times about the road into town being widened. This morning there was a sign up that said “Road closed beginning April 24.” Tate snapped to attention when he saw that sign and began protesting and asking questions. You would have thought he was one of the business owners on the strip that have been complaining loudly about losing income while the road is widened.
I have been dreading the day the road will close because it has the potential to make our daily trek into school stressful for Tate; and, when Tate is stressed, everybody is stressed. Starting his morning out with a detour will not be easy.
When Tate was really young and we had to take an alternate route to a familiar place he would become anxious and cry sometimes. He could read at a young age and recognize road signs and he became upset when he saw a detour sign, even on an unfamiliar road. At first I thought he was bothered by the bright orange color of the detour signs. He could not verbalize his thoughts or fears to me. I understand now that many people with autism like to do the same thing, the same way every time. He associated the word “detour” with “change” or “different” and these things are scary. 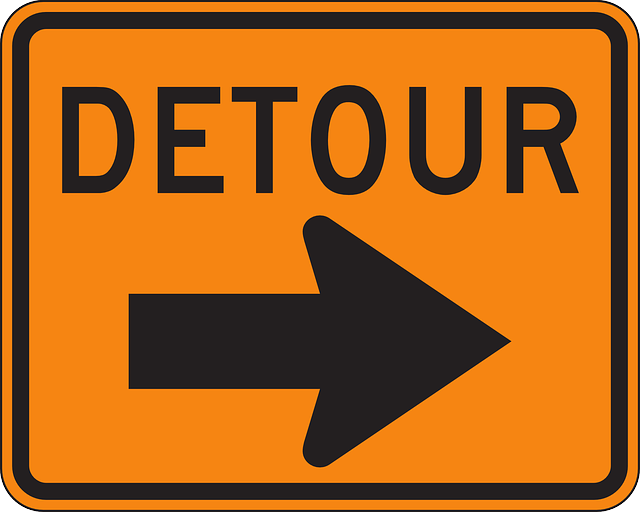 Two or three years ago, one of the major roads going the other direction was closed for a couple of months while a new overpass was being built. We had to use a temporary detour road that was new and built to accommodate traffic through that area. Tate had a major problem with going on “the new road.” He would protest and tell me we were going the wrong way. I explained over and over why we were using the different road for a short time. We weren’t so dependent on that route so I was able to avoid it most of the time. After we had used the temporary road for a couple of months he stopped protesting quite so loudly but always commented on it. I think the new route in to school will be accepted after a couple of weeks because Tate is maturing and learning to be more flexible all the time. I just wish he didn’t have to deal with the anxiety initially. I suppose it will get easier all the time. Tate is also “under construction” just like the road.

If you liked this post, here is another about Tate's unique way of looking at things: Pranks Phone Calls and Teaching Tate

Find me on Facebook at Quirks and Chaos. Like what you read? Want to become a follower? Click on the Google Friend Following gadget on this blog. It's over on the right side and asks you to subscribe. Or you can add the URL (the web address in your search bar) to your Reading List. You can do that by clicking the plus sign in front of the URL. Thanks!
Posted by mother of many at 11:50 AM