My hero: My son's Behavior Consultant

This blog post is long overdue. I have known for years it needed to be written and I have actually started it more than once. It is an intimidating task because I know there is no way I can do this one justice. I am not eloquent enough to find the words to express the things that need to be said here on this topic. But I would be forever sorry if I left this one undone.

I have a hero. I met her at one of the scariest times of my life, a time when I was frantic and panicked. I needed help, someone to tell me what to do. I needed someone to help me rescue my little boy, Tate, and bring him back to me. Because, one day he was with me, participating in our family life, and the next he was gone. Autism had crept up on us and stolen him.

My hero’s name is Nan Perrin. She is a Board Certified Behavior Analyst. She came to our home just days after our Pediatrician used the word, “Autism” for the first time and she has been with us for the duration. She came to us with fifteen years of experience under her belt. She knew the answers to all of my questions. I already knew how to parent but Nan taught me the parenting skills I would need to be a good autism mom.

My hero Nan brought my son back to me. Had we not met her at the time we did, and followed her advice, my son would not be the high functioning young man he is today. I am convinced of it. Nan gets the credit. No one else I turned to had the answers to the questions I asked. No one else had the experience, the time, or was even willing to help me to do the hard work that had to be done. Nan helped me find and train college students to do discrete trial with Tate. She loaned me a library of books and materials. She helped Tate to navigate preschool and later enter public school. She was our team leader at ABA meetings and our advocate at IEP meetings. Nan has asked our public school for services I would never have known existed and she is not intimidated when meetings get difficult. She knows the law.

Nan was Tate’s therapist but never turned me away when I needed her too. I cried on her shoulder plenty. She answered her phone at all hours of the day or night and she never made me feel like any question was too small or too ridiculous to ask. She took my calls even while she was on maternity leave, and even while she fought a battle with cancer. That is dedication.

After a few short years of spending so much time together, I started thinking of Nan as a part of our family and I believe she feels the same. I am not thankful for my son’s autism but I am thankful for some of the people we have in our lives because of autism. Nan is at the top of that list.

Not everyone who hears the words, “Your child has autism” is able to find a hero like we did. Perhaps they live in an area where there are no services available like the ones my son received. Perhaps the waiting lists are long. Perhaps they cannot afford the services. The monetary cost is exorbitant. When a couple considers planning a family, they know there will be costs incurred. They understand there will be food, housing and even medical bills that come with having a child. Some people even start a college fund upon the birth of their baby. But, the average couple does not plan for a tragedy. The average couple does not set aside enough money to provide their child with a costly preschool education, also known as early intervention. We often joked when Tate was small that he was getting his “college education” up front as most of his early intervention took place at the University of Kansas in the same buildings young adults were earning their degree in.

How did we afford it? My husband worked more and more hours. We used our savings. We refinanced our home. We borrowed money. We cut back on things we used to afford ourselves. It was hard but we did it. We are one of the lucky ones. What of the people who cannot do it? What of the hard working people who cannot afford early intervention for their children? Who is going to help their children? 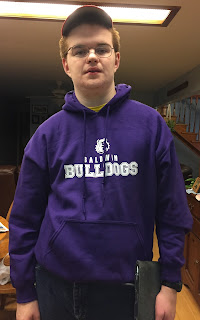 In this season of Thankfulness and giving, I am thankful for my hero Nan and the early intervention that our son received. I would urge you to help someone who is struggling to provide those services for children with autism.

For more about early intervention, click here: What is Discrete Trial?

Tate saw the new Peanuts Movie this past weekend and the Goosebumps movie a couple of weeks before that. There were characters that used a typewriter in both movies. Tate began a dialogue with his older sister about typewriters a few days ago and became convinced he NEEDED one. His sister happened to be the owner of a vintage pink typewriter and loaned it to him. He’s had it in his possession for forty-eight hours and has hammered out note after note, as well as his Christmas wish list. His first love may still be texting but the typewriter has him bewitched right now. He even incorporated the typewriter and notes typed out into a group text with his siblings this evening. Take a look: 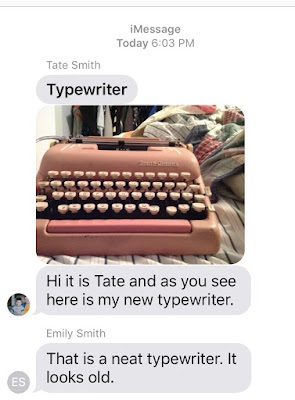 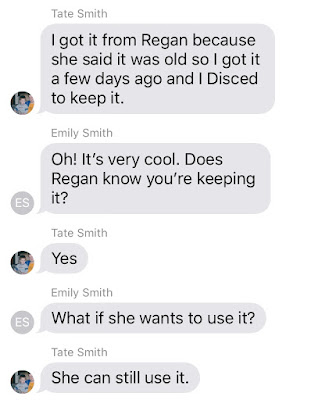 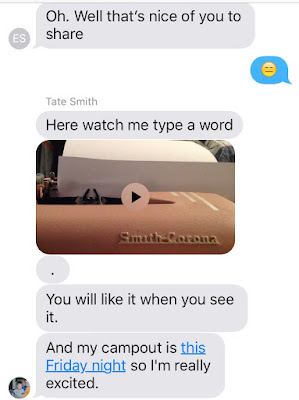 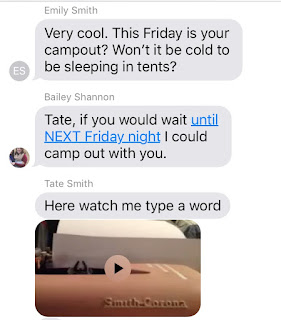 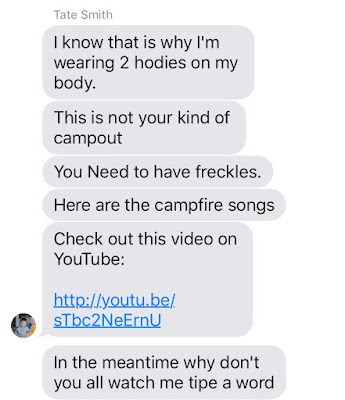 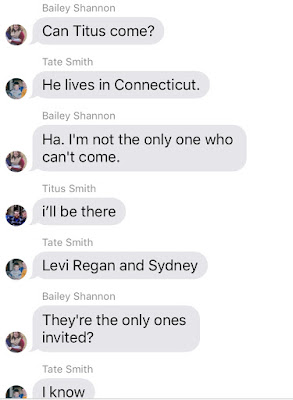 The word Tate typed the most in these short videos was "here." Get it? "Here watch me type a word" is what he kept texting them. The campout Tate is referring to in the above text and the following text is one he has planned without any parental consent. He planned one mid-winter last year that never came to fruition and he's held a grudge for ten months as you will see in the text below. Depending on the weather, it may or may not happen again. Tate will not listen to reason at this point and is arguing against the weather factor by assuring us that two hoodies instead of one is the answer to frigid weather. A friend from Texas was over at the time of his list making so he included her.  Somehow he has determined that those without freckles will not be invited into his tent. Your guess is as good as mine on how that criteria factored in. Ironically, Tate does not have freckles. The three siblings he wants to include in his outing do have freckles however.

Here are some texts Tate sent last week when his camping trip (to the front lawn) was in its earliest planning stages: 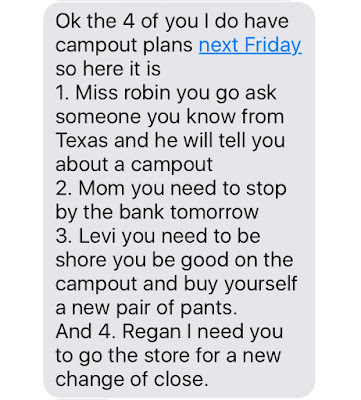 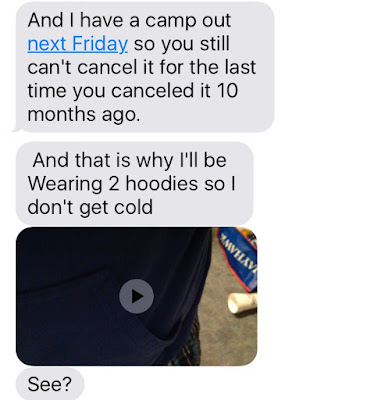 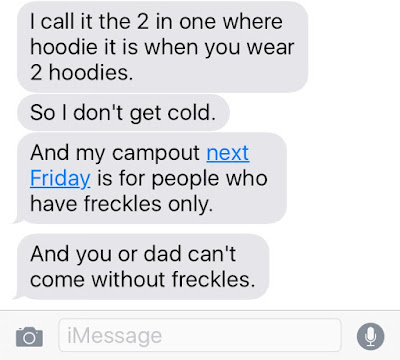 Do not feel too sorry for the outdoorsman here. Tate has opportunities over the summer to sleep in a tent.

Another group text this week from Tate showcased his new dresser. The reason he was asked about naming it is because Tate has named all his siblings' cars and insists they call their cars by name. 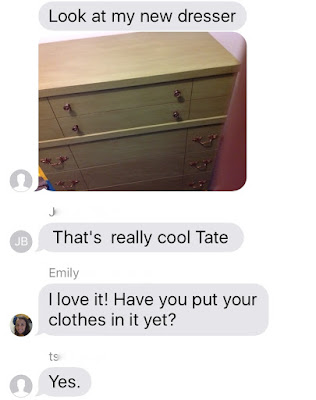 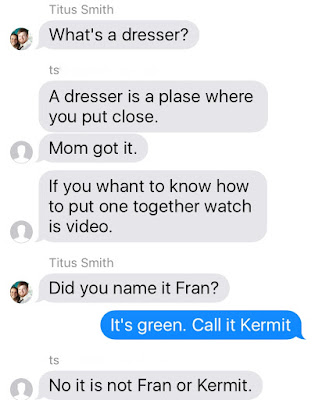 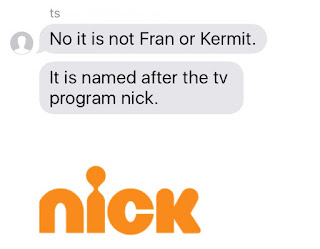 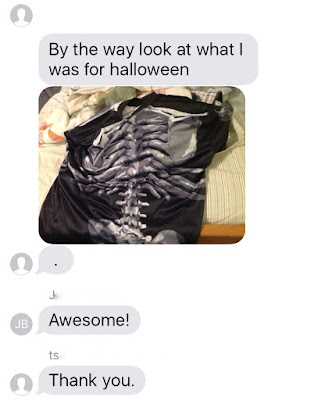 And lastly, Tate has been trying to convince me that he has too many chores around here. 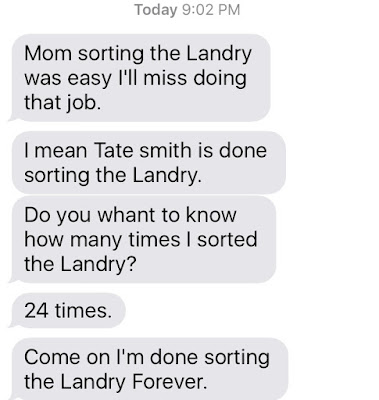 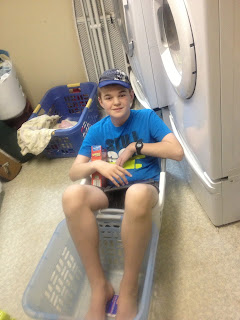