A Clean Room and A Precious Find

My fourteen-year-old son, Tate, is six feet and three inches tall, exactly the length of a twin mattress. For two or three years I have talked to Tate about getting a bigger bed, bringing it up fairly often. Each time he became anxious, adamant that he did not need or want to change beds. Tate has autism and change is hard for him. About two weeks ago, I could tell he was possibly warming up to the idea so I pushed harder. I wanted to let him decide, and this week he has declared he is ready. Today, I went up to clean his room, in preparation for the moving of furniture this weekend. We will be moving a queen sized bed into Tate's room Saturday.

Cleaning Tate’s room is always an adventure. He has things placed exactly where he likes them, and he does not like others entering “his space” either. I often clean Tate's room while he is at school but it’s July and the kids are all home most of the time. I try to respect Tate’s wishes for the most part, even his eccentricities, knowing he cannot really help having them. But, at the same time, even a kid with autism needs to conform sometimes too. A reasonably clean room is one of those aggravating things my son just has to accept for me to remain sane myself. Tate is not quite capable of keeping his room clean himself, although he is making progress. His eyes do not seem to be able to see a mess in quite the same way my eyes do. Siblings often pitch in to help with the work and it goes quickly. Sometimes Tate's siblings are better at motivating him than I am too. 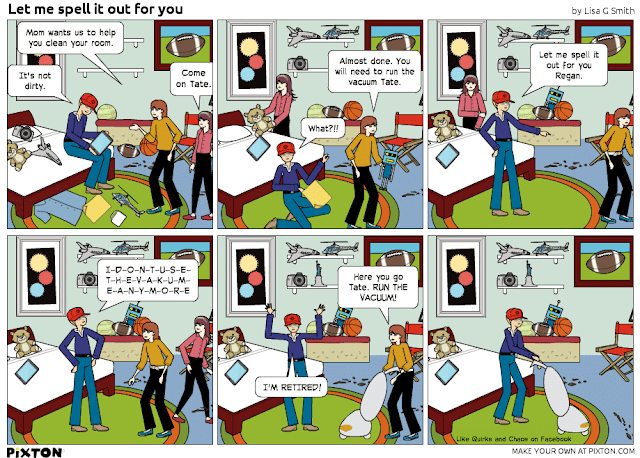 There are four large plastic tubs in Tate’s room and a couple of baskets. They contain toys he never touches: some that were his brother’s favorites, some that he got for Christmas, a few that never even came out of the packaging, all gathering dust. When I suggest getting rid of anything, Tate is usually resistant. There have been a few things that are far too babyish for him that I have been able to convince him to let go. Today I snuck a few things out that I was sure he wouldn’t miss. I vacuumed and dusted and carried out trash. I rearranged some things on shelves and made more room to display some of Tate’s artwork from school. He endured it all quite well, only becoming upset with me when I took some things downstairs to wash. Some of the anxieties and rigidities that Tate has lived with for so long seem to be loosening their grip on him a bit. He is maturing. 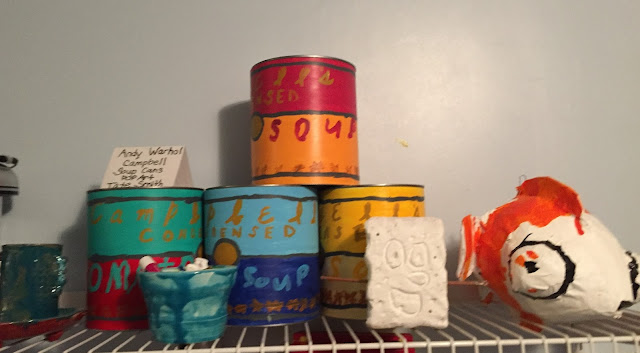 The last time we made drastic changes to Tate’s room, he was about eight years old. He was sharing a room with his brother Levi and we’d gotten them matching loft beds. The boys loved them. But we had not put enough thought into it, as Tate was still wetting the bed occasionally. With the added time and effort it took to come down from a loft bed, the accidents got much worse and Levi and I seldom got an uninterrupted night’s sleep. So, after trying many tricks and training programs, and making no progress with staying dry at night, it was back to the furniture store. We came home with a captain’s bed that matched the loft beds and we switched Tate’s out, giving Sydney the loft bed. For at least two years he could hardly stand to go into his sister’s room because HIS bed was there and it reminded him of how he’d been “cheated.” He has been in that twin-sized captain’s bed ever since and has not wanted to make any changes. His brother moved into another room a long time ago, giving Tate the opportunity to use the other loft bed but it no longer interested him. And autism reinforced for me once again how uncompromising it can be. 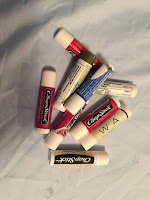 While cleaning Tate’s room I came across things that brought back precious memories, like Tate’s pet rock named Rocky. I had not seen Rocky in years. (See link below to read about Rocky.) I uncovered enough lip balm to last us all for years to come, and many typewritten lists. Tate loves lists. There were lists of movies, lists of movie personalities and lists of gifts Tate wants to receive. And, among those lists, I found something very precious that blew me away. It was a story Tate had typed out. It made me smile because it was so much fun to read. It made me cringe because the spelling was atrocious. It left me excited because it was something he did on his own, without help. It caused me to choke up because it was imaginative, and autism makes creativity and imagination harder for people with autism, so writing a story is not something that comes easy for him. I edited it just a bit so it is easier to read but changed none of the wording. I’m thinking he stole the first line from Snoopy perhaps but the tragic and abrupt ending is all his own. Read and enjoy.

It was a dark night. A man who is someone who can turn people into animals. Batman, Robin, R. L. Stine, C-3PO, and R2-D2, team up to stop him. They go to Kansas to find the Smith brothers a.k.a. Tate and Levi and their sister Sydney. They find out the only way to stop him is for the three related kids to go with them. Then they run into Casper the friendly ghost (who also goes with them) and Casper’s cousin Spooky who goes with them as well. And when they got there, the villain, as you all know, has released all the villains from Tate’s DVD’s. And when R. L. Stine told Batman to go to the bat cave, Robin went with him. Spooky gave Casper the way to stop the man. Tate went to look for a way to stop him. The man’s plan to take over the world is almost finished. He turned Tate into a dog. Ten minutes later, he turned back to normal. Levi opened all the DVDs and the villains got back into the DVDs and the villains were never seen again. Tate has the power to turn into animals whenever he sees the name of an animal now and Tate pushed the man to his death. The end. 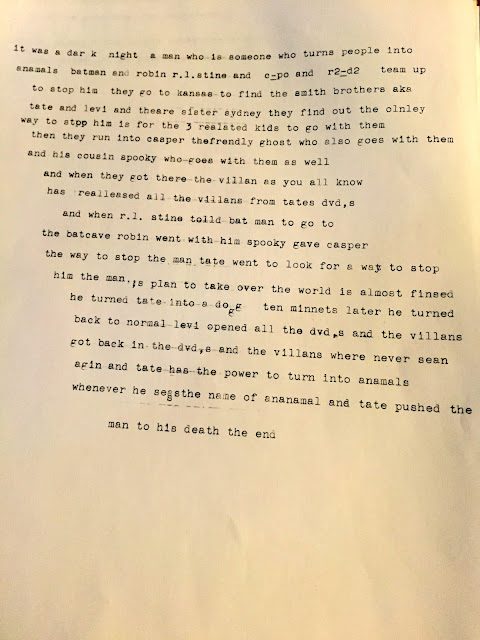 Who knew that cleaning a bedroom could inspire a blog post? If you liked this one then you might like: When a Rock is Not a Stone  and Typewriters and Texts

Forks Can Be Dangerous and Other Tips From Tate

My fourteen-year-old son Tate was born with autism. In my last post I spoke of the evolution of autism in our home, how I used to feel about autism, and how I have come to terms with it. There was a time when I never would have believed I could easily laugh about our situation, but I do laugh now. A lot. Every single day. I do not necessarily laugh AT my son. I do not really laugh WITH my son either, as he does not usually understand why I find things funny. I laugh because I enjoy my son and I enjoy the funny things he says and does. Kids are funny, autism or not. I began illustrating some of our humorous moments so that others might also be able to smile, understanding that autism is not always doom and gloom.

Trying to see the world through Tate’s eyes is challenging at times, yet somewhat entertaining much of the time too. He has a unique perspective and often a surprising way of looking at things. Tate offers us advice and gives insight often. Here are some examples: 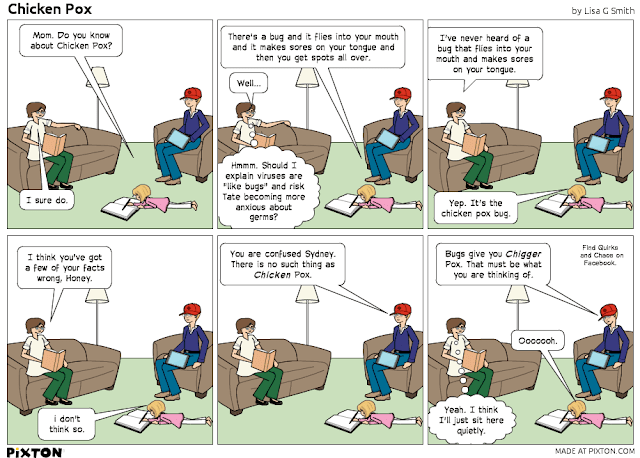 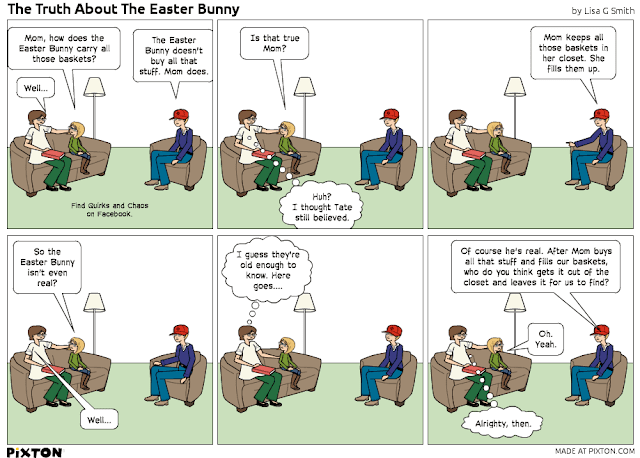 One of the biggest challenges we face, living with autism, is communication. There is miscommunication so much of the time. I can walk away from Tate, believing he understands the information or instructions given to him, when in fact he had no idea what was said. It’s not that he is not trying or does not care, although sometimes that may be the case. I believe he often “gets lost” in all the language and becomes overwhelmed trying to process it, so he tunes us out. And other times I am sure he fully heard but misunderstands. Regardless, we find ourselves in interesting conversations. Sometimes I feel like I’m in the old comedy routine, “Who’s on First.” 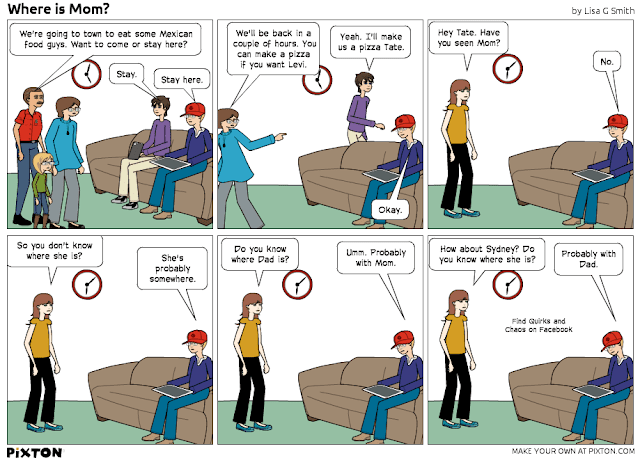 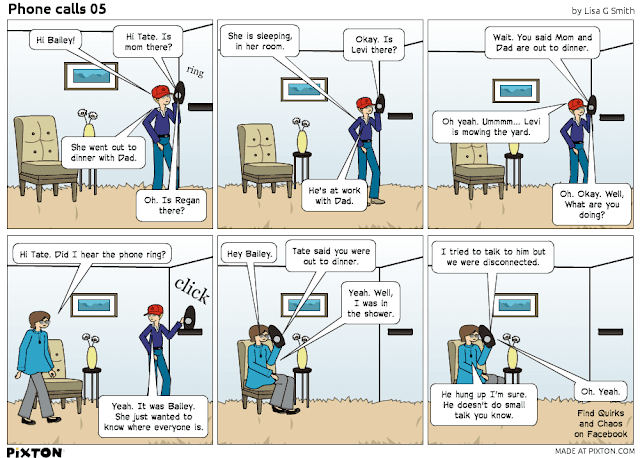 We work on communication and conversation skills constantly. Believe it to not, Tate has come a very long way. Tate sees small talk as a waste of time and really does not understand why anyone would want to talk about things he has no interest in himself. 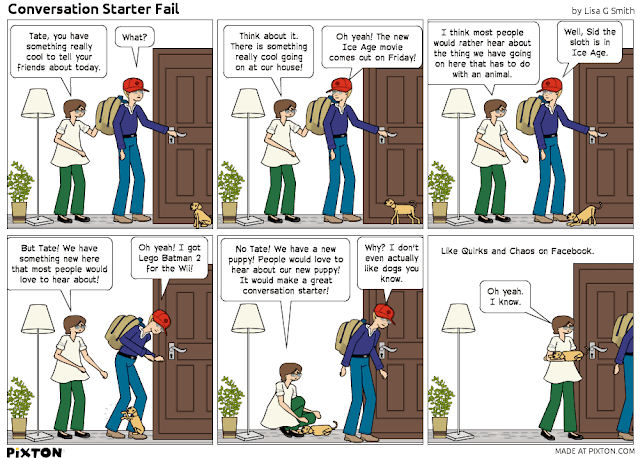 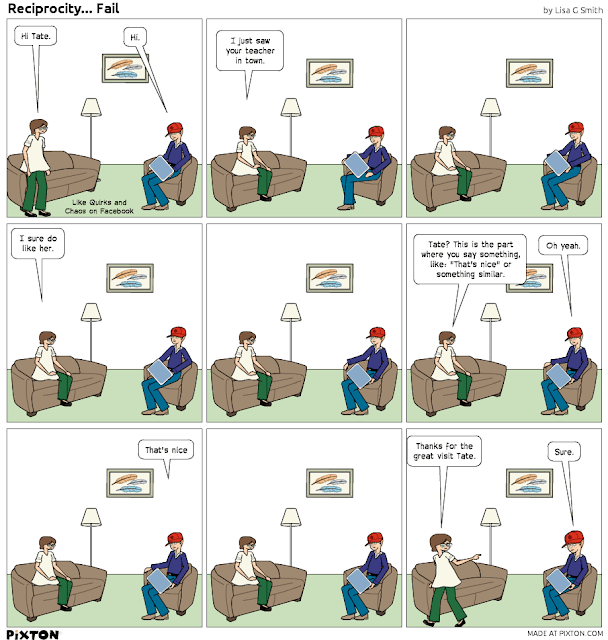 I received a question on my blog page from a little girl today. She asked me if having a kid with autism is as hard as everyone says. I told her that autism is hard, but it is mostly hard for Tate, not for me. I explained to her some of the challenges he faces now and some of the challenges I believe he will face in the future. But then I told her that being Tate's mom is not hard because I love him so much. He is a fun kid and we have a really good life with lots of laughter. Putting it into words easy enough for a child to understand may oversimplify it just a little but the bottom line is: Regardless of the struggles we face, Tate is my son and he means the world to me.

If you liked these cartoon illustrations, you might like these posts as well:
There is no ham in hamburgers.
Hobos, Goosebumps and Wiffle balls
Coffee Tables Aren't Hot