When my youngest son Tate was diagnosed with autism, he was around two and a half years old. Our story is similar to a lot of others I’ve heard over the years. There was an initial frantic search for services and therapies, years of early intervention that were hard to pay for, then denial that my son would be forever handicapped. Much progress was made and there were hopes of a “recovery” and then finally, there was acceptance.

Some days are a little harder than others. Most days we do okay. A sense of humor helps. A lot. Knowing we are not alone also helps. I like to blog about our experiences in hopes that I can make things a little easier for the parents who are coming after me. Lately I’ve been illustrating some of the things Tate does that may seem a bit odd to others in an effort help people understand autism a little better.

At age fourteen, Tate still sometimes misses things that are very obvious to the rest of us. And sometimes he is sure he understands things the rest of us are confused about when the reverse is actually true. Because Tate sees the world differently than I do I am often learning things from him. I have learned to appreciate his unique take on things.

Below are a few of the illustrations I have made so you can have a peek into our lives. There are many more to come so watch for future posts.

Figurative language is often a problem for Tate.

One of the ways autism elbows itself into a family’s everyday life is via perseveration. Perseveration is one of those words I had never heard before my son Tate was diagnosed with autism, almost twelve years ago. It’s a big word that encompasses a lot of things. To perseverate is to get stuck on something and to be unable to mentally shift gears. It might show up as a single word or phrase repeated over and over, or an action performed over and over. A person might wash their hands repeatedly because they are perseverating on germs. Another might quote lines from their favorite shows on television because those things seem to be running on a constant loop in their head.

Some people with autism have very narrow interests and perseverate on those few things they are interested in. It is different than someone without autism who might be zealous about a favorite topic. A person without autism might have an interest or a hobby they enjoy, but with limits. They can put that hobby away and go back to it at convenient times. A person with autism may become so consumed by the hobby that he cannot put it on a backburner. He cannot stop thinking about it or talking about it easily. It drives him.

While raising children without autism I saw some passionate interests. One of my sons absolutely loved dinosaurs and Legos when he was young. We had many books about dinosaurs and lots of Legos. However, he could put them away for periods of time and find great joy in other things as well. He enjoyed talking about dinosaurs and wanted to learn the names of different dinosaurs but he did not talk about dinosaurs for hours each day. One of my daughters was an avid lover of horses. She could have an intelligent conversation about horses but did not force that subject on all her friends daily.

My son Tate’s interests do vary a little. However, when he finds something he loves he gets stuck on that something, usually for weeks, sometimes months. There is almost nothing we can do to help him focus on anything else but the current topic(s) of interest. Most of Tate’s interests are inspired by the movies he sees. Tate perseverates about movies. He has his own DVD library that is quite extensive. He memorizes the cast and much of the dialogue then uses bits of the dialogue throughout our day. Tate is passionate about movies. About two weeks ago Tate decided he was going to need a video camera so he can make some movies. He put this on his Christmas list and began texting his family members pictures of cameras, not just any cameras, but professional-looking television cameras. Keep in mind that money and the value of things is just not a concept Tate has been able to master. He wants a video camera. He “needs” a video camera. I explained that his iPad can actually do the same things a video camera can. I talked to him about all the movies he’s made in the past on the iPad and how great those are. But no matter how much I talked and reasoned, I got nowhere.

If you do not live with a child with autism then you might be thinking, “So what? Kids “need” things all the time. You tell them, “No.” and move on.” Kids should not be spoiled, getting everything they want. Oh yes. Remember I raised five children without autism before Tate. I have said, “No. Get over it.” more times than the average mother. But telling a kid with autism that they will not be getting the thing they desire is different on a level you simply cannot comprehend until you’ve been there. The constant drip you have heard from an annoying broken faucet is not even going to touch the constant drip and the anxiety that you will witness when a child with autism “needs” something. 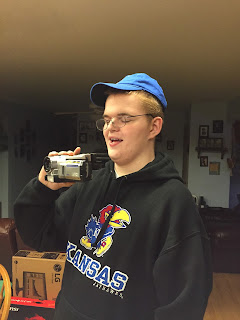 After a couple of weeks of knowing Tate expects a video camera for Christmas and me reminding him over and over that it was not going to happen, I led him to my closet. The constant "drip" was just more than I could continue to live with.

Long before I walked around with an iPhone in my hand, always ready to capture video at just a second’s notice, I owned a small video camera that recorded on 9mm tapes. It hasn’t been used in at least five and a half years. I got the box off the shelf, wiped a layer of dust off, and plugged that old camera into a wall socket to charge. I found one blank tape. Tate stood next to that camera as it charged holding vigil. He beamed and thanked me for “the early Christmas present.” He assured me over and over he knew just how to operate it as he had used one at school before. The instruction manual, also in the box, is written in language that is way over Tate’s head but no matter. I have little doubt that Tate will have that camera mastered in a few days' time. His movies will probably consist of tours of our home and documentaries about the merits of wearing a hoodie. I can almost guarantee he will be taping himself typing notes and lists using the antique typewriter he has been obsessing over lately. I imagine for a time he will be content. The proverbial constant drip about needing a video camera so he can make movies has been silenced for now, his anxiety turned to joy. I’ll take joy over anxiety any old day. I will enjoy it while it lasts because there will be a new drip starting soon enough for me to deal with.

If you like this post, be sure to check out this one: Typewriters and Texts
Also be sure and take a look at Tate's still photographs at The Photos From Tate's Camera.
Posted by mother of many at 9:05 PM 8 comments: