I normally go into Walmart on my own, solo, unaccompanied, without kids, unattached, unaided and alone (but not lonely), intentionally unassisted, in order to do my shopping without incident. “What kind of incident?” you ask. That’s right. Not all of you have spent time with my Sydney. 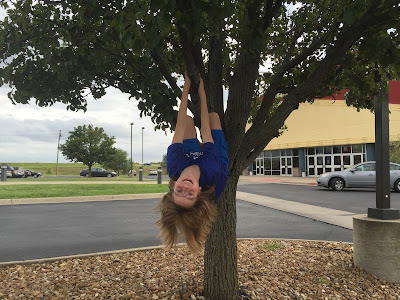 Sydney is truly a unique young lady who marches to the beat of her own drum. Sydney has no filter. If she thinks it, she says it. If she sees it, she touches it. If she likes it, she needs to own it. In a nutshell, there is rarely a dull moment when Sydney is around. She keeps things interesting.

Sometimes when I take Sydney places, “things” happen. Things happen that should only happen in sitcoms to fictional families, or in silly children’s books, never in reality. The author Barbara Parks wrote a series of books about a little girl named Junie B Jones that my older kids and I enjoyed very much. Sometimes I wonder if Junie B came to life, and is living in my home. Only I call her Sydney P.

My kids were out of school today for a teacher workday. And I needed a few things from Walmart. Against my better judgment, and because my list was very short, I took Sydney with me into Walmart. Milk is one of those things that cannot wait and we were out. So I threw caution to the wind, and drove to Walmart. I rationalized that Sydney and I could get in and out of the store quickly and I gave her a pep talk in the car before we entered the store. I was determined there would be no drama, and I would not give Sydney the opportunity to disrupt my mission.

Three minutes in, as we turned down an aisle to grab a cleaning product on my list, Sydney caught sight of the air fresheners. She became hyper-focused on those and stopped to look at them, hands on hips.

Knowing that she had to talk fast, because I was not slowing down, she loudly told me that we had an urgent need in our home for an air freshener. I looked back over my shoulder and told her to catch up, and that air fresheners were not on my list today.

Now, Sydney does not speak quietly, nor does she understand the concept of being discrete. We were not alone in the aisle, and Sydney’s claim that our home was in need of an air freshener drew the attention of at least four people. In order to make her case, and guarantee that an air freshener make it into our cart, Sydney began to describe the smell that she was sure enveloped our home. The people in the aisle all looked at me. They were not even pretending to look at anything on the shelves.

I asked Sydney again to move away from the air fresheners, assuring her (mostly for the benefit of the people listening) that we do not have the unseemly odors in our home that she was describing. But Sydney did not take a step. Instead she bent down to examine the different fragrances more closely. I walked back toward her and quietly told her that we needed to move on.

“Mom. Why are you whispering?” she said. “We need to talk about the smell I keep smelling in my room! Last night I couldn’t even sleep. It was so awful. I’m pretty sure an air freshener would really help.”

It just so happens that I go into Sydney’s room several times each day. I had been in her room that very morning to put away laundry. There was no odor. There is no odor. And I told her as much while she was bent down inspecting all the Glade, Renuzit, and Febreeze containers. She wasn’t listening, but I could see out of my peripheral vision that everyone else in the aisle was leaning in and had heard it all. And the crowd had grown slightly. I briefly wondered if one of those folks might even offer to buy an air freshener for the poor little girl whose mom had her living in a room with a stench.

“Mom. Do you know how these things work? I don’t even see how you open them. Do you have to take all the paper off to smell them?”

I tried again. “Sydney. There is NO smell in your room. We don’t need an air freshener.”

So, she changed tactics. “Mom. You know that smell when we make a fire outside to roast hotdogs and the wood is burning? I smell THAT smell in my room sometimes too.”

And as one more person walked into the congested aisle, I reached down and picked up an air freshener, tossed it into the cart, and hurried away, chin held high.

That air freshener is on Sydney’s dresser this evening and she comes into the living room every few minutes to tell me how wonderful her room smells.

If only those folks at Walmart could hear THAT.

If only I had waited and gone to Walmart tomorrow. We could have lived without milk for twenty-four hours.

If this story made you giggle and you want more be sure and find us on Facebook at Quirks and Chaos.

The above is just one of hundreds of stories I could tell. Here are two I have illustrated: 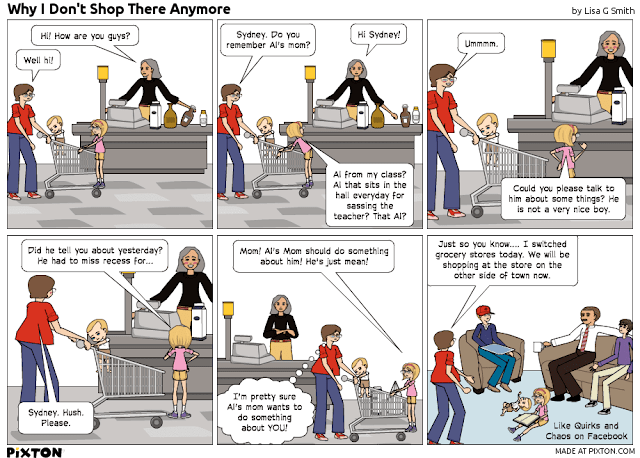 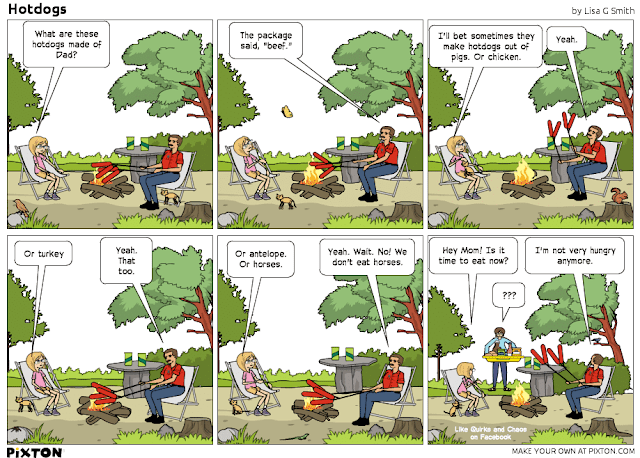 Transitioning to High School with Autism

My son Tate is a freshman in High School this year. We are two weeks in and I am breathing a bit easier now. He’s surviving. Transitions can be hard for people with autism. I worried about everything. How would Tate manage the huge transition to High School? How would he manage all the smaller transitions from one class to the next, in a hall crowded with so many other students? Those kinds of things are so much harder for Tate than they are for you and I. On Tate’s second day of school, his older brother ran into him in the hall. Literally. 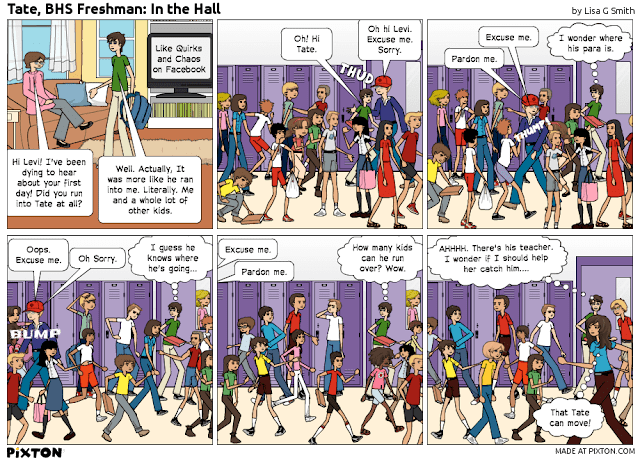 Tate’s brother has since seen Tate in the school halls, and reports that Tate has mastered the skills necessary to dodge most of the other students now. Whew!

That first week was a bit rough on Tate. He was exposed to some ideas he could hardly believe. He came home distressed because his choir teacher mentioned the wearing of robes at the scheduled performances. Luckily, she was most understanding, compassionate and accommodating when I explained Tate’s sensory issues and his anxiety about things like this. 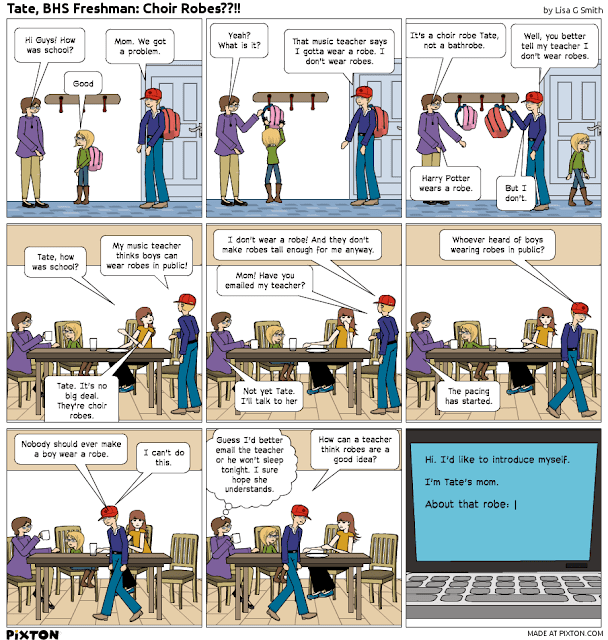 In addition to the anxiety felt by Tate, and all the new routines to learn, there is also a learning curve for Tate’s new educators. Each year as new teachers get to know Tate and his quirks, I worry that Tate will be misunderstood or even mistreated because of his lack of social awareness and socially acceptable responses. Will his teachers understand autism? Despite my fears, Tate is adjusting marvelously. The High School teachers are proving to be as proficient and as understanding as the teachers we left behind in Junior High. 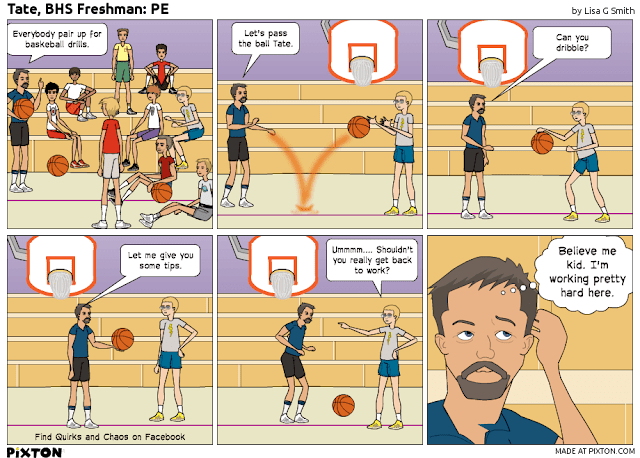 Working with Tate requires patience and a sense of humor. Luckily, the Physical Education teacher is demonstrating that he has both when he teaches Tate. Despite Tate's awkward gait and limited coordination, P.E. has always been one of Tate's favorite classes at school. I wondered if High School P.E. would be very different. I have always heard that much of the bullying that goes on in a High School is done in gym class. After just these few days I can see that Tate likes his P.E. class very much. The fact that there is never homework, helps!

Tate does not believe homework is ever justifiable. Since he first entered public school he has been adamant that schoolwork should stay at school where it belongs. 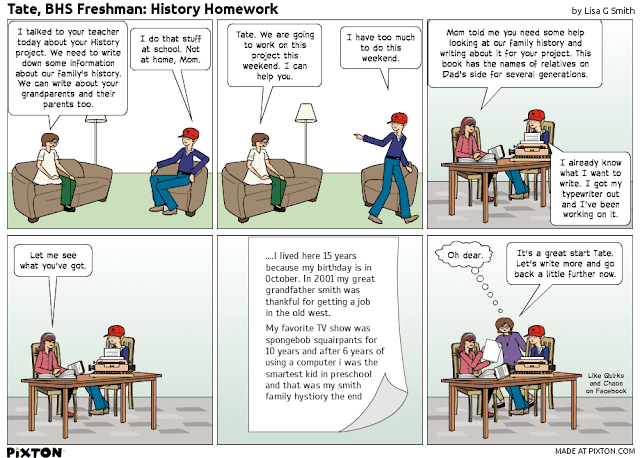 Tate's attempt at his report was his personal best. I read it with mixed feelings. Things like this show me just how far behind Tate is. But they also show me how far he has come. It is true that Tate cannot perform academically at the level of his peers. However, I can honestly say that I am every bit as proud of his efforts as any other parent. Tate works hard and does the best he can in a world he has trouble making sense of. He shows me daily what it means to persevere. It sounds a bit cliché but it is a fact: Tate has taught me far more than I will ever teach him. He makes my heart smile. 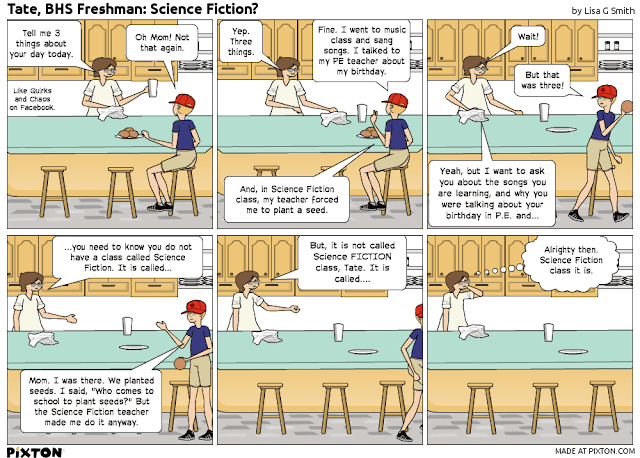 Get to know a child with autism. You will be forever changed in ways you could not have imagined.

If you liked this post, you might also like: Coffee Tables Aren't Hot
or this one: There is no ham in hamburgers
SaveSave
Posted by mother of many at 12:52 AM 2 comments: