Not in Kansas Anymore

We are not in Kansas anymore. We are travelling this weekend. Today, my nephew got married in Texas, much to Tate’s annoyance.

Tate has known about this event for months and months, and the specifics have dominated much of his time and energy. I think Tate even went through the steps of grief before we came. There was denial, anger, bargaining, depression, and finally acceptance. Tate has been resigned for several days to the fact that he would indeed be coming with the rest of the family for this wedding.

Sydney and I actually came to Texas several days ahead of my husband and sons. Trying to make things as easy as possible on the guys, I packed them before I left. I put Tate’s clothes in a brown paper bag for his dad to later place into their suitcase. I wrote on the paper bag with a marker, reminding them not to forget Tate’s toothbrush. And after I got that done, I drove away. And then I started getting texts from Tate, as did all his brothers and sisters and his dad. That brown paper bag was quite offensive to Tate. 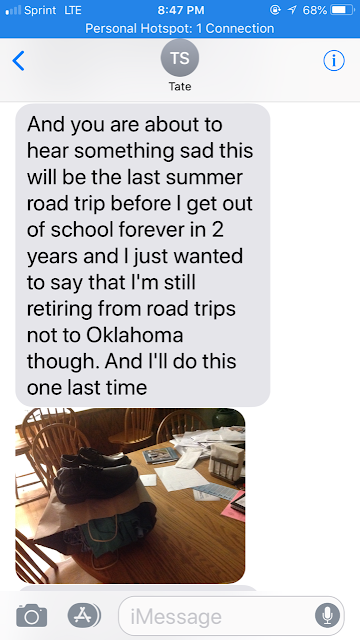 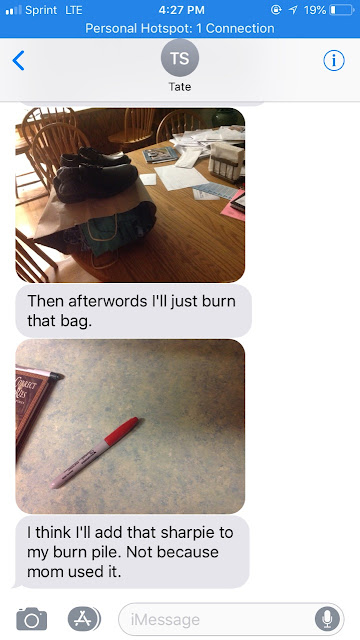 This is not the first time Tate has gone on a trip with us, determined to make it his last. He’s been to several college graduations out of state, and a couple of other weddings. Each time he goes through all the same steps, trying to convince me how unnecessary these trips are. 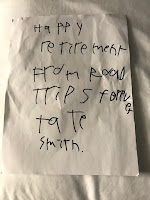 This time is the first time that Tate has planned a retirement party to seal the deal. In our hotel room tomorrow, before we head for home, Tate will be presenting a speech that he has written. He is officially retiring. I almost feel like I should have gotten him a gold watch for the occasion.

It does not seem to be the travelling itself that Tate hates, as much as it is the absence of being home. These trips ruin Tate’s regular routine, and infringe on his need to keep things predictable and the same. He is way out of his comfort zone. Tate has been pacing and wringing his hands at the hotel and at the wedding reception, unable to relax. Tomorrow, we will head for home. Monday morning Tate will wake up in his own bed and everything will be right in his world again. Well, until the next graduation or wedding, which according to Tate had better be in Kansas, on a Monday, or he is NOT coming. 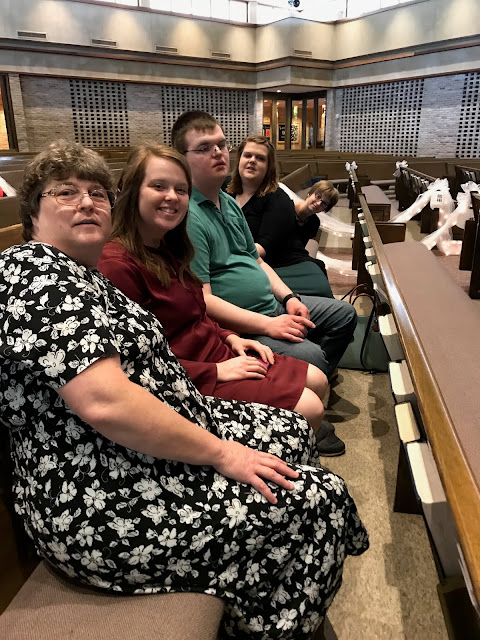 Note: Night 2 there was no sleep. Not one minute of sleep for Tate. And this is the most recent text... 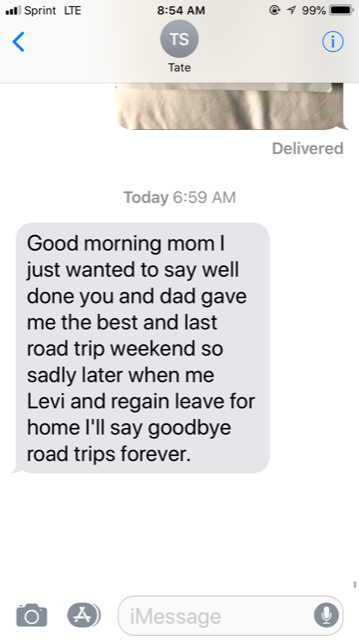 Tate's dad and I are leaning toward an adult babysitter next time we have to travel. UGH!